This is the second in a series of posts about Foo Fighters albums.

“Doll”
Starts with a kind of creepy voice and a slow guitar. Continues in the same pace, but with clear sound. A short and strange song. It leaves me with a WTF? feeling. What were they thinking starting an album like this? It’s not good.

“Monkey Wrench”
I love this one. That instant rock riff and high tempo from the beginning. There’s power in all the instruments. It’s hard for me to sit still, I want to jump up and down like I’m on a concert. There’s pounding distinct drum, a thundering guitar and bass sound and the screaming/singing voice by Dave Grohl that’s my favorite. Especially the part that begins with ”One last thing before I quit I never wanted any more than I could fit into my head …”, there he really turns the power in his voice up a notch and I love it! The echoing ”fall in fall out” is also a favorite of mine that adds something extra.

“Hey, Johnny Park!”
Powerful instrumental intro that fades into almost a capella vocals. Beautiful. I think the voice sounds different, like it’s not Grohl singing. It bothered me so much I had to look it up, but it seems to be him It’s a varied song with some instrumental parts, some with heavy instruments and vocals and some slower and softer, which makes the song interesting but I can’t really get a grip on it. I don’t like  it very much.

“My Poor Brain”
My poor ears! What’s up with that cacophony in the beginning? Then there’s a softer part and then the full power that I like so much. It varies between the soft and the powerful parts and it works just fine. I like all of it, but as I’ve said before I’m a sucker for the harder Foo Fighters sound so I want more of that. Still, I really like this song.

“Wind Up”
Vocals drowning in instruments which is a shame. This song is quite plain there’s not much variation in intensity or tempo. That makes it ok but not great. Towards the end there’s some of that Grohl screaming which is always a good thing.

“Up in Arms”
No. Don’t do this. You’re the Foo Fighters, not the Beatles… Enough of that soft whispering singing and Beatles-like sound. And then, almost as if they heard me, in the middle of the song there’s a stop, a brief silence, and then it turns into something else, a full on rock song. Good, but you’re not forgiven for doing that thing in the beginning.

“My Hero”
Heavy on the drums from the start, I like that. There’s power in this song. Even though it could be a sleazy love song judging by the lyrics, it doesn’t sound like that when it’s played the way it is, with integrity and authority on all the instruments. I know when it’s played live it’s often in another pace but this is much better.

“See You”
Here’s a new sound, acoustic and jazzy, swinging. No, I don’t like that kind of music and it doesn’t matter it’s a band I like. A bit fresh, granted, but no thanks.

“Enough Space”
I just wonder… why this insistence on strange beginnings? It’s not the first time. This one starts with a distorted sound going back and forth between my left and right ear and it’s uncomfortable. The song itself is a powerful rock song, that’s good. It features some of my fave Grohl screaming voice. Gets me going every time!

“February Stars”
Soft and slow. It’s ok but I’m waiting for something to happen. That’s a problem I have with some of the slow Foo Fighters songs, they can get sooo tedious and boring. Then there’s a part towards the end when the power kicks in and the song is lifted to a higher level. I wish that had happened sooner. I really have a problem with this kind of build-up. You’re losing me earlier on and it doesn’t quite help that you try to recover in the end.

“Everlong”
I have to admit I’d heard the slow and delicate live version of this song before I heard the studio version and I didn’t like what I’d heard. I know many Foo Fighters fans consider ”Everlong” to be their best song ever, but I just couldn’t understand why. This version, however, it’s totally different. I do like the power and speed in their songs, like I’ve said before, and the studio version of ”Everlong” has that. It’s a great and catchy song with a lot of rock and roll power. Still, I don’t consider it their best, but it is great for sure.

“Walking After You”
No. Nothing. This song doesn’t give me any feelings at all, neither good nor bad. I’m just bored. One of those tedious songs that they have a few of. Nothing happens and it’s not interesting at all.

“New Way Home”
Starts with a bang and continues with some speed, but lacks that extra something. A rather plain rock song, quite typical Foo Fighters sound when they’re not at their best. There’s really nothing wrong, it’s good but not great. That is, until somewhere near the end, then they suddenly put in that extra gear and once again I hear what they’re really capable of. But why wait so long? It’s not the first time. If you want to fully appeal to me you must give me something earlier on in the songs, or I might just dismiss you as boring and not continue listening. That’s a shame because I’d miss out on some really good music. As it is now, the end of this song and album leaves me with a good feeling inside me. A good way to end.

Overall impression: I find it very hard to summarize this album. I don’t find any coherence, no thoughts behind why the songs are there and the order they’re in. There are some good songs, some low songs and something in between. Monkey Wrench is clearly my favorite, it stands out from the rest, and to some extent Everlong as well. But the album feels kind of weird, it’s not one of those I put on and listen to all the way through. So the overall impression really is that there is no overall impression. It’s separate songs and they vary between highs and lows.

This entry was posted on April 10, 2015 by PunkRockHappy in Foo Fighters, Music, Rock and tagged Dave Grohl, Foo Fighters, I'm listening to, rock, The Colour and the Shape. 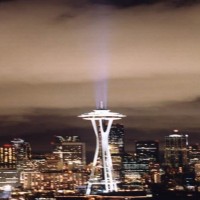